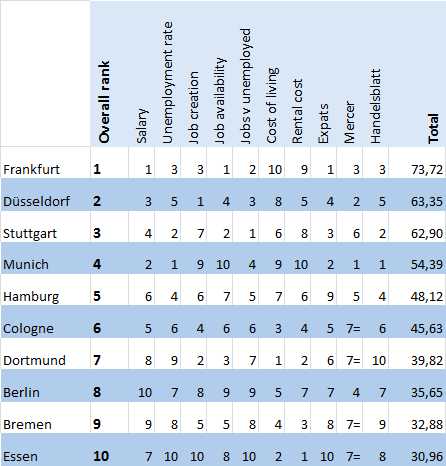 Ranking Methodology:
The ranking is comprised of 10 key metrics drawn from pubically available data accurate for October 2017. Some of the data however, the Handelsblatt ranking for example, refers to data collected in 2016. The different criteria are given a weighting (shown in brackets below) and a final score out of 100 has been calculated. The individual criteria ranking positions above are shown to simplify the table, however the actual value depends on the relative value that each city achieves on a 100 point scale. Therefore, the difference between Munich and Frankfurt for ‘Rental Cost’ is significantly higher than between Frnkfurt and Stuttgart (the 3rd most expensive city). Original values can be viewed here.

Average Salary (15%)
The average monthly salary varies from approximately €3000 in Berlin to nearly €4000 in Frankfurt and is provided by the National Employment Agency as of Oct 2017.

Unemployment rate (10%)
As provided by the National Employment Agency for Oct 2017. Interestingly the average in each city is higher than the current national average of 3.9%. This shows that although the majority of new jobs are being created in cities, the lowest unemployment is in the countryside.

Job availability (15%)
A key criteria to show the competition for vacant positions and the ease of finding employment. This criteria is calculated by proportionally measuring the working population against the number of registered vacancies.

Jobs v Unemployment (10%)
Another indicator of competition for vacancies as well as the overall health of society is comparing opportunity for unemployed people to secure employment. There is no guarantee that the registered unemployed population have the necessary skills to fill the vacancies, however it is guaranteed that if there are no jobs, then the unemployed will stay unemployed.

Cost of Living (5%)
Although the cost of living provided by Numbeo (excluding accommodation) is an important factor, the variation between costs in each city was very small, often no more than a few euros. Therefore, the ranking weighting has been set at 5% – enough to acknowledge that it still matters.

Rental Costs (15%)
The largest part of your monthly salary disappears in to rental costs and across germany there are some massive disparities, hence the heavy weighting given to this criteria. At the low end, in Dortmund, the €7/sqm cost seems amazingly low compared to the average €20/sqm required in Munich. Values are provided by Immowelt.

Expats (5%)
The expat value is a simple measurement showing the comparative number of expats living in each city according to the National Bureau of Statistics. More foreigners is not necessarily good, hence the low weighting of 5%, but it does speak to the desirability of certain cities to foreigners and the likelihood of encountering an English speaking community.

Mercer Quality of Living Survey (10%)
The Mercer survey measures a whole basket of metrics including health, wealth, employment and services for families, all from the perspective of expats.

Handelsblatt Future Index (10%)
Handelsblatt produce their annual ranking through research company Prognos and compare 405 towns and cities across Germany on their future potential. The ranking considers many economic and infrastructure metrics to try and predict the current and future health of each town and city. The results for Bremen and Dortmund for example are relatively bleak with positions of 282 and 283, but with Munich at #2 and Stuttgart and Frankfurt both making the top 10.