I wish I was writing a blog post about a really good English-speaking tailor in Frankfurt who makes great shirts and suits to order for a reasonable price. Unfortunately, there isn’t one that I found.

Biggest problem researching this blogpost was that the cost of shirts and suits is high, so it wasn’t possible to test the wares of a variety of tailors. I settled instead for two different tailors at that looked like possible good choices.

In general, there are hardly any tailors in the Frankfurt area and none of the ones I visited spoke English. This was unfortunately a first major drawback. When I look at other major European cities, like London, Paris or Milan they are overflowing with tailors of varying levels of quality and price. I couldn’t even find 10 different places in Frankfurt.

If you try searching for yourself in google, the term you need is ‘Maßschneider’ or ‘Maß-Schneiderei’. Both turn up similar results. I contacted and scouted the following places:

I have added the price per shirt as a general guide, but the one thing I found on closer inspection is that the one shop genuinely offering a range of shirts at the lower price range was Echtmass. The others had a few materials available in the cheap category, but the material was so obviously cheap and tasteless that no one in their right mind would consider it a genuine option. The real cost at Masswerk and Cove & Co was more like €150 per shirt.

I tested shirts from Echtmass and Cove & Co by way of an experiment. You immediately realise why Echtmass is the cheapest option. The other tailors are all in good, if not prime, real-estate locations, and the atmosphere inside is of a rich gentleman’s club. I am certain that half the price goes on the venue and decorations. Echtmass on the other hand is a small shop front in a cheaper part of town. They make their clothes in South-east Asia to keep costs down and simply do measurements here.

At this point I would normally have made a good recommendation, but even though the experience and service at both places was excellent and friendly, the product at both failed to live up to expectations. I didn’t get the cheapest material at either place because of the limited choice. All shirts were delivered within the promised 6 week turn around.

The shirts from Echtmass arrived fastest and had the nicest material despite of being €40 cheaper than Cove & Co. But the finishing and shape let them down. The fit wasn’t great and the collars were a strange shape. 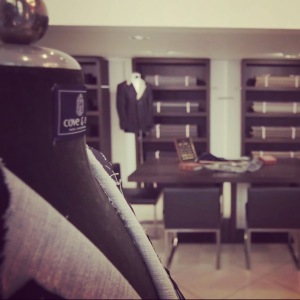 By contrast, the shirts from Cove & Co were a very nice shape and nicely made here in Germany. However, despite costing €140 a shirt, the quality of material was disappointing. Thin and creasing like paper. Hard to understand the point of offering such poor quality, cheap materials at an upmarket tailors.

Online tailors
I had a look at a couple of online tailors out of desperation after this. The options looked good but the many average or negative reviews online mean that I won’t be testing. A couple of online suppliers in Germany shutdown and the international suppliers like Tailorstore or Tailor4less all get poor reviews. So I won’t be testing. But I was almost fooled by the slick online sites allowing you to load up your own measurements.

Unfortunately, I guess I will have to wait for a chance to go to another country before I try again to get tailor-made clothes.

If you have a good experience here in Germany though, let me know!